It is the Lord’s desire, and ours, that we have an intimate relationship with Him. He wants, and we want, to move progressively deeper into His love. We want to spend time ‘snuggling-up’ to the Jesus and to feel his passion for all mankind (including ourselves) as we listen to his heart beating with a rhythm that says, ‘I love you’.
However, the devil, who doesn’t want us to get that close to Jesus, tries to deceive us by luring us into the flesh where our vain attempts at intimacy with Jesus become white-knuckled intensity that frustrates us and gets us into a bad place with ourselves and with those around us.
The devil counterfeits intimacy with intensity. If we chill and relax (chillax), the Lord will draw us with cords of love into the place that we both desire to be. Let’s enjoy Jesus and the richness of our relationship with Him.
Posted by Unknown at 15:09 No comments:

Read Mary Nichelson's review of 'Wee Boys From Glasgow Don't Cry' by Peter Stanway. It should be a must-read for anyone who longs to make a difference on any level of ministry: http://www.marysworld411.blogspot.com/ Wee Boys from Glasgow Don’t Cry, but readers may when they read some of the heartbreaking stories author Peter Stanway shares in his book Wee Boys From Glasgow Don’t Cry. Whether reading about Stanway being rescued by his father from what could have been a fatal fire, to knowing he was choking back tears as a five year old listening to his Mom being abused in the adjoining room, it is impossible to remain detached from his written experiences.

It is amazing he survived his early childhood when accident after accident threatened to steal his young life. Later, at the age of twelve, he became physically active to avoid the shame his father placed on him for being “a sissy”.

His crime? Playing Rugby instead of football. “I was fit but lonely”, he wrote. He began experimenting with existentialism, transcendental meditation, philosophy, drugs and alcohol. In pursuit of fulfillment, fantasy crept in.

Thanks to a Christian Geography teacher, Stanway asked Jesus into his heart but as he put it, “I knew nothing about the Holy Spirit. I had a two-cylinder faith, Father and Son but no Holy Spirit”, which he explains, is the source of strength and power to follow Jesus. His conversion was brief.

As a young man, he lived the life of a free spirited, free-willed, adventure seeker that proved to be controlled by addictions. Stanway was living on the street, going town to town, knowing he needed something more and honestly seeking it, but unable to make a long lasting change.

Meeting Nancy, getting involved with WOTS (Way of the Spirit) and pure determination proved to be Stanway’s stepping stone into permanent conversion. Ironically, once he is able to re-channel his energy and make tracks in the right direction, his past haunts him through a life threatening illness. Stanway is honest and revealing as he takes his reader through the liver transplant that literally saved his life.

Stanway is passionate about everything he does. It is evident prior to his conversion, but when you see him using his passion to create change in others, it is downright inspiring. He is a true people person-compassionate on multiple levels and willing to do what it takes to rescue others. He gets it because he’s been there. He is an unstoppable force, chasing God and the good in mankind with all he has. And these days, that’s a lot!

Wee Boys From Glasgow Don’t Cry isn’t just an autobiography, it is an example of how to minister and do it effectively. He is energetic and knowledgeable-a combination that proves to be lethal when used against the powers of darkness. His story will challenge ministers, motivate lay men, and encourage the reader. If you have ever wanted to make a difference, this is the man to learn from.
Posted by Unknown at 11:41 No comments:

Who is McKenzie?...Excerpt 8: http://www.peterstanwaybooks.com/synopsis.html Like a body blow from a prize fighter, the shock of instant recognition took his breath away. It was her, it was Sarah. Amazingly beautiful, her teeth flashed pearly white behind her warm, charismatic smile. She was engaged in animated conversation with a group of young adults. One of them, a pretty twenty something elegant lady, caught McKenzie’s eye and came striding over to him.....
Posted by Unknown at 16:12 No comments:

Due to the tremendous generosity of people like you, the full amount of money for a new sound system for TheWayCM Pakistan was donated in less than six hours. Praise God, hallelujah!
Posted by Unknown at 10:50 No comments:

Be Part of God’s Work in Pakistan 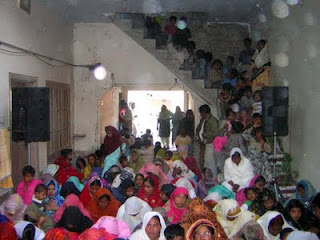 The Way Christian Ministries’ (TheWayCM) Apostolic Overseer for Pakistan, Apostle Asher, has sent me this request below. Can you help?
Two years ago he started the first ever Christian Bible College in Multan, Pakistan. The number of students has now grown to 100 and they represent 6,000 members of TheWayCM throughout Pakistan, praise God.

“Hi Apostle Peter,
I want to start class of 100 students, and I want you to teach once or twice a week. I need a speaker system urgently. Speakers that can reach100 people cost 13500 Pakistani Rupees (equivalent to £100 or $155). They come with 2 Microphones.
Thanks and blessings,
Love you,
Asher”
Giving by Text
Simply text TWCM40 to 70070 and you’ll get a text straight back, asking how much you want to give. You can give ANY amount between £1 to £10. All gifts, great and small, make a difference to the work of The Way Christian Ministries ...so why not grab your phone and give it a whirl! If you prefer to give online, you can here:
http://www.thewaycm.com/donate.html
Thank you.
Posted by Unknown at 13:08 No comments:

Israel and Stephanie are Married 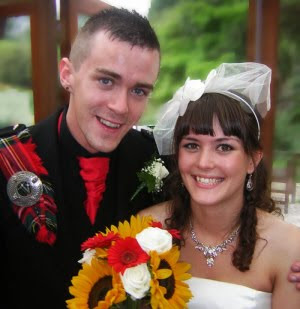 Israel, our son, and Stephanie (nee Lambert) were married on Saturday September 10th 2011.
An amazing day was had by all.
We pray that the Lord will richly bless their marriage and their ministry together. May they have a long, healthy and fruitful life.
Posted by Unknown at 16:12 No comments:

Who is McKenzie? - Excerpts

To McKenzie they looked like giant claymore-wielding warriors to others they were wind turbines that revolved majestically in lines across the undulating hills of the Southern Uplands of Scotland.
In a bygone era, ferocious warriors would have lined these same hills; tartan-clad armies that fought face-to-face with every invader. The Scots were fearless, even wild, and they were feared by every adversary who came against them. Throughout history, from the Picts until now, Scottish soldiers were infamous in battle.
McKenzie had a fighting spirit, a warrior spirit....http://www.peterstanwaybooks.com/synopsis.html
Posted by Unknown at 10:47 No comments:

Read this recent review from Mary's World Blog.
Saturday, August 27, 2011
New Age Deception by Peter Stanway
Peter Stanway demonstrates what the phrase "working for the Lord" means. The Way Christian Ministries is a pioneering ministry that "is intent on fulfilling the Great Commission by making disciples out of Christians." He accomplishes this through several training courses and methods. He is a successful author with yet another book, Who is McKenzie set to be released before Christmas 2011. As Director of European Development with Rev Publishing, he endeavors to add many European authors to the Rev Media portfolio. His television and radio ministries reach viewers and listeners worldwide. His schedule, I am sure, keeps him busy. Yet, there is always time for Stanway to stop and do the one thing he is notorious for; sharing his heart. The latest burden he carries is for the church and the deception that has infiltrated not only non-believers with New Age ideas, but of late, believers. It concerns Stanway that half-truths are embraced as accepted ideologies. Where as at one time this doctrine ran parallel to the church, it has intersected, causing division by deception. In his latest book, New Age Deception, Stanway blows the whistle on theologies and the ministers that teach them, and how they have compromised the truth for fear of losing their congregation. He does not expose individuals or even specific churches, yet makes a convincing argument that through the so-called liberating school of self-exploration, mind expansion, sex, drugs and rock and roll, people have found themselves in bondage to a counterfeit freedom.
Stanway is persuaded that believers can reverse the infiltration of the New Age movement with one word: discernment. "Discern in the spirit, do not judge in your mind." His final plea is to the believer, which captures the essence of his burden for the church. "Wake up Christians. This is the way, walk in it. Jesus is the truth, come to him and be free." It is a universal message that is relevant and essential.
Posted by Unknown at 08:31 No comments:

All the latest news from TheWayCM: http://thewaycmnews.weebly.com/
Posted by Unknown at 14:11 No comments: